How To Get The Most Out Of PowerPoint 2013

The functionality of this all new and exclusive Microsoft Office 2013 has now been streamlined considering both Tablet devices as well as laptops and desktop computers too. There are a number of new enhancements and tweaks added making it a significant update in contrast to its predecessor.

Here are some enhancements explained that can be best used for getting the most out of Microsoft PowerPoint 2013:

The PowerPoint landing page has been given a significant refurbishment. In contrast to the landing page of this latest version, the one in the older version was confusing as well as bland for a number of users.

An instant access to the templates available locally apart from the online database is offered in this version. Orientation, Industry, Design Sets, Nature, Marketing, Media, Small Business and many more are a few categories into which the online templates can be divided.

There are a plenty of color themes available with which the template can be used. If the user is willing to use dark colors along with a theme with light color, the available color themes can be checked out by simply clicking on the template. The style and color of the elements in the template customization is the same as in the older versions.

An active connection with SkyDrive account has now become possible through the Account Management window in this latest version of Microsoft PowerPoint 2013.

The connection can be established automatically as soon as the user signs in for Microsoft Account. The same account can be used on various devices that gives the opportunity to synchronize the documents to the cloud with viewing and editing capability, on any of the synced devices. This feature helps you to commute without carrying any documents along, which makes sharing of documents really convenient and hassle free.

There are various widescreen themes and templates offered in this exclusive Microsoft PowerPoint 2013. However this feature was also available in the older version but it was required to do it manually that further changes the size of every element in the slide. But, this latest version now incorporates built-in support for Widescreen display devices. In addition, for editing documents, full screen mode has also been introduced.

Alignment Guides is an exclusive feature released in MS PowerPoint 2013 that provides users flexibility to align text and objects conveniently to each other. This feature can be used for merging various shapes. In addition to this, auto text wrapping is another feature added here through which the text is adjusted automatically around the image to avoid overlapping.

Adding audio, images and video files has become possible in MS PowerPoint 2013 directly through the internet without even downloading anything on your computer. Although the same feature was also there in the older version of PowerPoint but pasting the embed code of a particular video was required. The available sources include YouTube, Bing Image Search and Office clipart. 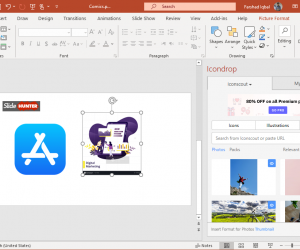 Get Access to More Than 60,000 Icons in PowerPoint with Icondrop 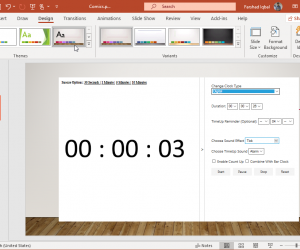